Four common problems poker players can run into at the table 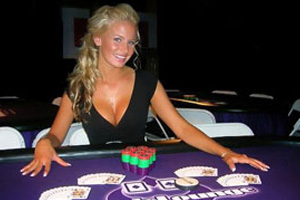 Poker is a game ripe with pitfalls, especially when you’re play with and against other playerspoker strategy. One of the most popular – and challenging – variations of poker is Texas Hold’Em, and these are common errors that can find even the most experienced players waving “bye bye” to their chips:

Bad bluffs
Being able to bluff is not only about keeping a “poker face” and being aggressive with your play and bets early into a hand. Knowing who you’re bluffing is just as important. If you have an aggressive style of play to begin with, your big-bet bluff may not spook off the other players. And if you’re a patient and careful player, a sudden shift in gears could give your buff away.

You have to ask yourself if the guy you’re bluffing is wise enough to: 1. Pick up on any changes in play. 2. Wise enough to fold and buy into the bluff. Experienced players are often times easier to bluff because you know they don’t mind surrendering a hand if they think you have them beat. An inexperienced player may not know to pump the breaks and could end up calling your bluff, only to look like a genius after beating your weak bluff hand.

Overexcited Aces
Pulling an Ace in your hole cards does put you at an advantage, but sometimes players can get overexcited when it comes to that edge and bet themselves into a bad hand waiting for a pair to show up on the table. Experienced players will back down if it doesn’t look like a strong hand is going to show up, but newbies can often bet too big into a pot and get caught with a losing hand after opponents call and put a price on that Ace.

Pounding low pockets
Pulling a pocket pair is often times an instant winner, but if you do end up saddled with a low pocket pair – seven or lower – you can often times over bet pre-flop and lose when an opponent draws a higher pair on the table. Don’t over-invest on small pocket pairs. Rather, you should slow play pre-flop and then scan the possible outcomes once the flop rolls out. If there’s a chance an opponent could finish with a higher pair, pace yourself and read the table and the pre-turn bets. If most players are checking, your low pocket pair might be strong enough to hold up.

Chasing losses
Before a single card is dealt, set your betting bankroll for the night. Know the buy-in and the buy-back if you plan on playing long, and try to stick to your budget when playing: win or lose. Too many times, players go well beyond their depth after a bad game and find themselves chasing losses and buying back into games that haven’t gone their way. Losses could be due to bad cards or bad play, but it could also be due to the competition at the table. If you find yourself swimming in shark-infested waters, there’s no shame in taking your loss – and hopefully some valuable lessons – and walking away to fight another day.