How to recover from a cold poker streak 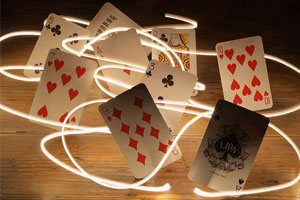 How to recover from a cold poker streak

From the way the cards have trickled down, you might as well have been sitting on an ice block with the AC on high and a giant 7-Eleven Slurpee in your hand. A nasty cold streak has quickly trimmed your chip stack from high-rise to bungalow, but not all is lost. You can shake off the frost and dig yourself out of the snow, but you’ll have to follow these simple steps and some good poker strategy:

Composure
Keeping your cool shouldn’t be so hard when you’ve been dealt cards as cold as these. However, an extended losing skid at the table can put you on the brink of meltdown. No matter if you’ve lost two or 10 straight hands, clearing your head and preparing for the next deal is imperative to getting back on track. If you’re flustered, you can’t focus on the things you should, like tendencies and tells from your opponents. They’re sizing you up, so don’t give them anything that could extend those losing ways.

Be selective
Since losing your shirt, you have about as much wiggle room as a pair of skinny jeans fresh out of the dryer. You’re going to have to be picky about which hands you play and which ones you fold, and you’ll likely fold a lot more than play. Be patient and don’t let your emotions get the best of you. You likely won’t win back your entire loss in one hand, so make the better ones count. And it doesn’t have to be unbeatable hands, like pocket aces or kings, because you already know those aren’t showing up too often. Be picky, but not too picky. Don’t let opportunity pass on by.

Bet amount
When you do find yourself holding a winning hand, be aggressive and don’t let those big stacks on the other side of the table push you around. You’ll probably have a few “all in” shoves – more than you’re comfortable with – but you can’t stand and trade blows with the heavyweights for too long before getting knocked out. Going all in is often times a much better pre-flop strategy than trying to keep them guessing with long, drawn-out raises. They see how many chips you have left. The guess work is minimal. It’s pretty much an “all or nothing” approach to chip management.