The four poker players you’ll invite to your holiday party 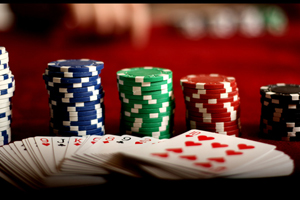 The four poker players you’ll invite to your holiday party

It’s the holiday season, which means friends and family are coming over for a visit – and if you’re a poker player, a friendly game of cards. Here are the four poker players you’ll have at the table and how to play against them this season in online poker tournaments:

Drunk uncle
That holiday cheer is potent stuff. At first your uncle was holding his own and playing smart, folding when he should and actually had a nice stack of chips going. But you could pretty much graph the decline of his winnings by the increase of his blood alcohol level. Now, six glasses of punch later, he’s going all in with a pair of fours and nodding off whenever it’s his turn – when he’s not spinning yarn about his poker glory days with a glazed-over look. Take it easy on him, but it’s probably best he loses quick and gets himself a cab ride home.

First timer
Your sister begged you to let her new boyfriend join in the annual poker game this Christmas. And when asked, “Does he know how to play poker?”, she answered with, “He knows enough”. Apparently, knowing enough about poker consist of being aware of poker – not so much the basic rules. But hey, it’s the holidays. Hold his hand and help him out for a bit, but once his feet are wet don’t let him off the hook. And whatever you do, don’t cuss him out when he asks, “Is this anything?” and shows you his straight flush. Ugh.

Ghost of Xmas Poker
It could be your brother, best friend or cousin. There’s always one guy who takes the annual holiday poker game a little too seriously. He’s avoided drinking all night – in order to play with a clear head – and showed up sporting a leather jacket, a baseball cap pulled down over his face and aviators on, like he’s Phil Hellmuth or something. He’s cold and calculating and shows no mercy to first timers or drunk uncles. His steely disposition sucks all the fun out of the game. He’s the poker equivalent of Ebenezer Scrooge.

Poker poppa
Your brother is a walking promotion for birth control, sledding over to your place in his mini-van packed with five screaming children – age 1 through 13. He’s been looking forward to some “me time” since Halloween and was hoping the annual poker party would be it. No dice Dad. The two older kids are fighting over the remote control in the den, and the 3-year-old just went Greek wedding on the Christmas tree. He’s rushing back and forth to the table between hands, trying to play referee as well as poker. You don’t have to do much to get the best of him. He’s either going to quit or lose due to lack of concentration anyway.