Waving the white flag: When to fold playing poker 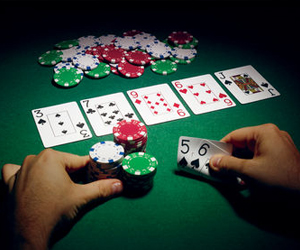 He who fights and runs away, lives to fight another day. The age-old rhyme may not be bursting with courage but it holds true – especially when it comes to poker. There’s no shame in folding, which is something players have a tough time with. There are certain times a player should recognized that they’re beat and bail out before things get worse especially if you are already getting the best signup bonus.

Here are the best situations to fold when playing online poker:

Opponent check raises
In games like Texas Hold’em and Stud, an opponent may get overexcited about a strong hand and start throwing their weight around. While everyone else is checking, they’re seeing any bets and raising. That not only ups the price on seeing the next cards or drawing new ones but it’s a good indication that they have a strong hand. If you’re holding nothing or you’re on the fence on whether you should play that hand or not, you may want to let them have their fun and back out before things get too expensive.

You have a little, they have a lot
When your chip stack runs shorter than Spud Webb, you need to be very protective of your money. And if you up against an opponent with a healthy stack and who can afford to be more frivolous, you have to be careful not to bring a knife to a gun fight. They can buy and sell you butt, and if you aren’t confident that your hand is money in the bank, don’t even engage with that set of eyes peering out behind the giant tower of chips.

You’re strong but there could be stronger
Like Kenny Rogers famously sang, “You gotta know when to hold’em, and know when to fold’em.” And sometimes you have to fold a good hand – depending on what’s on the table. Players can get lured into a false sense of security with a good hand, like if you’re holding a pair of Jacks with a King coming up on the flop and an Ace showing on the turn. The two Jacks can do some damage but there’s a chance someone is holding a pair of Kings or Aces. How much is it worth to you to see if that’s the case?